It was in July or August 1971. That was the first time I went on vacation to Denmark with my parents and siblings. In a pretty holiday home in Bøtø By on the beautiful island of Falster. I was 16 years old and I could hardly have imagined that this debut would be followed by several hundred visits and stays later. At that time, having traveled far from the Ruhr area, the situation soon changed seriously, as my life only one year later led me to the gray steamship company, so that by the end of the 1970s my residence had to be relocated to Schleswig-Holstein.

This ultimately led to a large number of camping and holiday home holidays with the northern neighbors, who score not only with the beautiful landscape, but also with their great serenity and friendliness. When crossing the border, the Germanic hectic pace suddenly disappears, even the traffic is much more relaxed than in Germany, which is also great.

The stays in Denmark over the years have not only had the character of a holiday, but a significant part of my professional life has also taken place there, always in Danish waters and ports. I presumably know all of the navigable Danish waterways and bodies of water, many of the seaside cities, Frederikshaven and Copenhagen were more or less our second home ports, which were traditionally visited very often by German speedboats.

Spearhead on the way

Whereby suddenly I can think of something about Danish serenity. During a NATO maneuver in the spring of 1990, a speedboat squad of the then German Navy, mutated a few months later into the German Navy, was supposed to demonstrate the relatively new weapon systems at sea to the Danish naval chief. Due to a planning error, this assignment fell to the two youngest, and therefore the most inexperienced, commanders in the squadron, whereby I was the absolute Benjamin, as I had only taken command of my ship at the beginning of the maneuver, Bold Game 1990 - exactly - in this one small formation as "Rottenknecht" served. Somewhere in a bay, the Danish fleet chief was taken over by an anchored supply ship. And then quickly, high speed steps, combat squadron and a few minutes later the online command system - no nonsense, there was already back then - an alarm firing with the artillery was ordered. And so the two German missile speedboats happily fired practice ammunition at an imaginary target somewhere in the sea.

We were enthusiastic about our readiness for action, and despite all modesty, we thought we were the maritime NATO spearhead in the Baltic Sea, an assessment which, however, experienced a kink a few hours later. In the evening, after arriving in Copenhagen, my colleague in command told me that during the shooting the following conversation had opened up between him and the Danish admiral in the operations center: “Can you shoot anywhere, Herr Kapitänleutnant?” “But yes, if they did Safety conditions are met everywhere. ”“ So, also in Danish territorial waters? ”Oops, we were - admittedly, I didn't even notice it on board my high-performance ark - whether our urgency was undergoing a serious diplomatic slip, of course you don't shoot around in the neighbour's maritime front yard.

No question, this number could have suddenly stumbled our young commanding careers, if the calm of the sympathetic Danish flag officer had not left it with our honest apology and a small drink in Copenhagen. A Dane, just.

Denmark is a fantastic holiday destination; Wide, great nature, great holiday facilities and beaches, well-tended gastronomy and lively cities attract me again and again over the decades and therefore I have been standing with the camper at Vadehavs Camping in Denmark for some time, face to face with the Wadden Sea Nature Park, even the restrictions the Covid-19 pandemic can be adequately and easily met here.

Striped by the bus

But still, it's not all positive. Let's go back to 1971. Together with my brother, we had signed up for a guided riding excursion. The boss of the troop was a beautiful young woman with a blonde ponytail, who of course immediately caught our attention. Horse behind horse the path led over a narrow path near the beach, lined with young trees and angular bushes. "I tell you, there is a Dane up there," I informed my brother, who was trotting behind me, or better walking. “How did you come up with that?” Somehow a stupid question, after all we were in Denmark, to which I consequently replied: “Look, she doesn't wear a bra!” That was clearly visible from behind through the thin T-shirt and in the spirit of the time German propriety but a touch exciting and unusual. "But I'll find out."

Somehow, I had no idea about riding, I was able to move my horse to march forward, past the others, until I finally got to the level of the young lady. I oriented myself sugar-sweetly towards her and fired a nice pick-up line in her direction. Before the young lady could indicate her interest, as I hopefully assumed, a bus hit me, or rather, a strong branch that swept me out of the saddle like nothing. To cut a long story short, Danes and horses have not been able to irritate me since this laceration, but this has not affected my love for the country and its people until today. 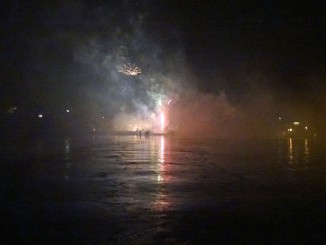 Fete on the ferry: New Year's Eve in Sehestedt

Dispose of Italian: The gas station does it